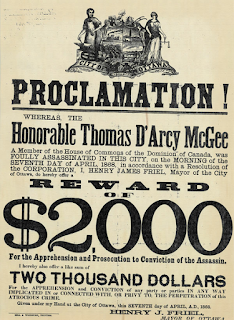 The youngest and one of the most intellectually gifted of the Fathers of Confederation, Thomas D’Arcy McGee enjoyed a remarkable career as a journalist, poet, author and politician in Ireland, the United States and Canada. As a youth, during a period of famine and international revolution, he was one of the leaders of the Young Ireland Rising movement of 1848. D’Arcy McGee also took an uncompromising stand against the Fenians — Irish republicans who wanted to free both Ireland and Canada from British rule. At the age of 42, in the early hours of April 7, 1868, he was assassinated on an Ottawa street by an Irishman who saw him as a traitor to the country of his birth.

Tickets: $20 plus taxes
$10 plus taxes for Museum members, seniors and students