Observe the Sons of Ulster Marching Towards the Somme
a drama by Frank McGuinness,

The play centres on the experiences of eight Unionist Irishmen who volunteer to serve in the 36th (Ulster) Division at the beginning of the First World War. It reaches a climax at the start of the terrible battle of the Somme on July 1, 1916 — the actual anniversary of the Battle of the Boyne in 1690 - in which the Ulster Division suffered heavy casualties. It explores how both the Somme and the Boyne have come to have a significant place in Northern Irish Unionist consciousness.
Visit the Tara Players website: http://taraplayers.ncf.ca/season.html
Posted by Craig at 22:01 No comments: Links to this post

On March 19 there will be an Irish dinner/dance at the Kanata legion, 70 Hines Rd. 613-591-5570. I will be there to teach Irish dance, there will be entertainment, and live music, and door prizes. Tickets are $20 and will be available at the Feb 26 dance or at the Kanata Legion 613-591-5570. I believe the dinner will be Irish stew.
UPDATED 14 March: Due to slow ticket sales the St. Patrick day dinner/dance ceili at the Kanata Legion on March 19 has been cancelled. The people who purchased tickets from me will get a full refund, please email me to let me who you are and see me at the ceili on March 26.


Brian Armstrong
Posted by Craig at 20:13 No comments: Links to this post

Kevin Dooley, Irish Canadian Author, will read and sign his new novel "The Angira Legacy and The Catalyst", parts 2 and 3 of the Angira Trilogy.

Sponsored by: Ottawa Public Library
Posted by Craig at 16:03 No comments: Links to this post

Austin Comerton, President of the Rose of Tralee, Ottawa Centre says “This festival gives the hundreds of thousands of Irish descendants the opportunity to celebrate the very best of everything Irish. I am proud that Ottawa has the possibility to be represented again in Tralee in August 2011 at such a prestigious international festival.”

The Ottawa selection event is currently scheduled for Sunday March 13th. Applications need to be submitted by March 1st 2011. The entrants will participate in the St Patrick's Day Parade in Ottawa on March 12th and spend time with the judging panel over March 12th and 13th.

Location:
Residence of the Ambassador of Ireland
291 Park Rd, Ottawa, ON

Austin Comerton
Posted by Craig at 21:14 No comments: Links to this post

I was humbled to receive the following email from a theologian in Ohio:
I just posted the article, "Tales from the Past and Dreams for the Future: The Top 30 Celtic Culture Blogs" (http://theologydegreesonline.com/tales-from-the-past-and-dreams-for-the-future-the-top-30-celtic-culture-blogs/ ) on my site. I'm happy to tell you that your website has been included in the list. I thought I'd email you about it in case you think your readers would find the article interesting enough to warrant you giving the article a quick mention on your site.


- - - - - - - - - - -
Many sincere thanks to Tim for his generous words. My initial glance at his list of top blogs appears to show at least 29 great blogs on Irish culture. Please check out his informative article, and explore Irish culture via his linked blogs. Unrelated to Irish culture, I really enjoyed this piece of research on Tim's blog. : )
Posted by Craig at 21:03 No comments: Links to this post

www.productionscaravane.com
Posted by Craig at 20:54 No comments: Links to this post

TORONTO, ON (February 15, 2011) – The inaugural year of The Toronto Irish Film Festival (TIRFF) will feature the critically acclaimed documentary His and Hers, as well as The Secret of the Kells and two animated Oscar nominated shorts Granny O'Grimm's Sleeping Beauty and Give Up Yer Aul Sins on Sunday, March 6, 2011 at TIFF Bell Lightbox.

"TIRFF aims to showcase the very best of Ireland's vibrant cinema to film lovers of all backgrounds," says Michael Barry, TIRFF co-founder. "With the strong program of films we're announcing today, TIRFF offers a unique cultural destination for Toronto's Irish community to connect with the culture and language of back home through the magic of cinema."

A critical success at Sundance, the Dublin International Film Fest, London Film Festival and Galway Film Fleadh, Ken Wardrop's documentary His and Hers combines observation and charm to tell a 90-year-old love story through the voices of 70 women.

"We couldn't be more pleased to present His and Hers. TIRFF's programming reflects the variety of unique films that are coming out Ireland," notes John Galway, TIRFF co-founder.

TIRFF's family screening is from the producers of the Oscar nominated The Secret of the Kells. Transporting viewers to a remote medieval outpost of Ireland, young Brendan (Evan McGuire) embarks on a forbidden adventure telling the story of the mystical Book of Kells.


Tickets are now available online through the TIFF box office.

A post-screening reception will follow the festival at Gracie O'Malley's on March 6th starting at 6:00 pm.

Submitted by Michael A Barry

Posted by Craig at 19:38 No comments: Links to this post

More info:
http://www.siamsa.org/news/Fiachra_en.htm
Posted by Craig at 20:03 No comments: Links to this post

Hello folks, we are having our annual Food Fair and Concert at the Aylmer United Church on March 19th.

This is a popular event and usually sells out quickly. There will be 80 tickets available for the Dinner/Concert. There is room for about 200 for the concert. Check out the poster for details. Please feel free to post or forward it to your friends.

Hope you can make it. 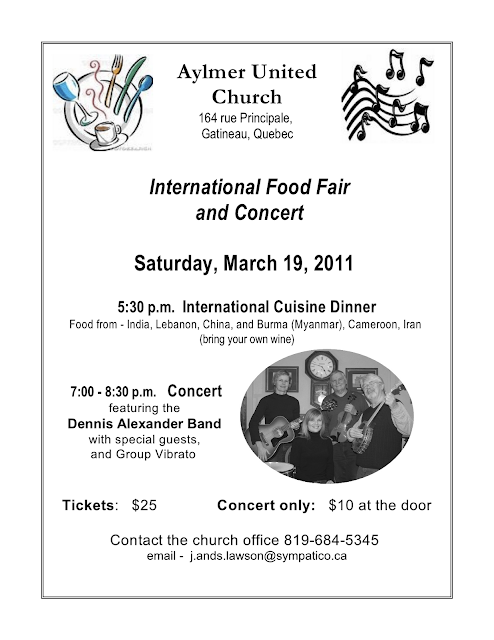 Posted by Craig at 23:05 No comments: Links to this post

This production is comprised of a young and talented group of dancers and musicians dedicated to re-creating the ambiance, moods and emotions associated with this Irish and Celtic music. Cast members include the winner of the 2009 Roots/Traditional Recording of the Year, Troy MacGillivray, and Canadian Grand Master Fiddle Champion of 2009/2010, Julie Fitzgerald. Also appearing as story tellers, are two very accomplished actors from the Toronto Irish Players, Jonathan Lynn and Kevin Kennedy.

The troupe's energy, enthusiasm and precision have drawn praise from audiences across North America and in Europe. One reviewer commented on how the energy of the performers seemed to be driven by the audience participation, which "grew as the evening progressed." The most exciting thing about the show is the spontaneity the performers bring to the stage.
The Magic of Ireland truly reflects the Celtic spirit in an evening filled with traditional Irish dance, music and song enhanced by costumes, lighting and sound and brought to life by a group of dedicated talented dancers, singers and musicians.

The Magic of Ireland is coming to Perth, about an hour west of Ottawa, on Wednesday March 9 at 8:00 at the Mason Theatre, Perth and District Collegiate Institute. Tickets are $33, and available from Tickets Please in Jo's Clothes at 39 Foster St. Perth. Call 613 485 6434, or book online at www.ticketsplease.ca. Discounts are available for children and groups. Book early for best seat selection.
Posted by Craig at 15:55 No comments: Links to this post