Padraig O'Broin (Patrick Byrne) 1908-1967 was an internationally known Canadian Poet. He ranks among the great Canadian Poets of his time - Al Purdy, Milton Acorn. He worked as Poetry Editor for the Canadian Authors Association and McClelland Stewart publishers. Padraig , who came to Canada from Ireland in 1913 with his family was also a Gaelic poet, scholar and translator. He taught himself the very difficult Gaelic language and founded and edited Celtic/Gaelic Journals in the 1950's.


Kevin Dooley, Irish born and bred, has lived in Canada since 1977. He now works as an independent scholar/heritage activist and musician.  He is the author of several novels and now lives in Ottawa.
Posted by Craig at 20:37 No comments: Links to this post


Tonight there is an Irish made film being shown at Library and Archives.

BALLYMUN LULLABY follows Irish music teacher Ron Cooney, who has been working in Ireland’s Ballymun housing estate for fifteen years. During this time he has witnessed the effects of increasing funding cuts to the area, including the demolition of six of its seven tower blocks. In an effort to challenge the negative views many still hold of the area – views that have the potential to deny a future for Ballymun’s youth – Cooney sets out to produce a collection of music that will give these young people a voice. Working with composer Daragh O’Toole, the Ballymun Music Programme attracted the attention of the RTÉ Concert Orchestra, who agreed to record the music in a unique collaboration with the students. As you will see and hear, the results are breathtaking.

Posted by Craig at 12:25 No comments: Links to this post


On Sat Dec 13th, there will be a house concert of Celtic Christmas music. Here are the details:

Join us for a merry evening including music, food, and good company! 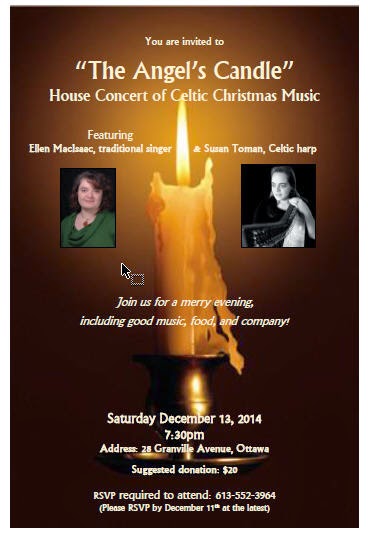 Posted by Craig at 10:31 No comments: Links to this post

Free WORKSHOP: Trad Tune Jam
2 p.m.- 5 p.m.
Patty’s Pub – 1186 Bank St.
Come and play in a traditional session with CFMA nominees and local players. Patty’s Pub is located in Old Ottawa South, near the remainder of the day’s activities – their food is good, their beer is local (and they have the biggies too), and the entertainment will be excellent. Irish/Scottish/Quebecois/Cape Breton/Old Time players are all welcome!

Source: http://folkawards.ca/2014/11/canadian-folk-music-awards-performers-announced-for-2014-gala-awards-show/
Posted by Craig at 10:05 No comments: Links to this post