On August 19, at the Ottawa Folk Festival, Britannia Park, Ottawa, myself and about 200 other people were educated, entertained, and 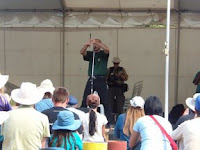 enthralled even, by Andy Daub and his teachings in the ways of tin whistle wisdom and technique. The Ottawa Folklore Centre, where Andy can normally be found teaching a variety of instruments, sponsored the workshop by providing a FREE Clarke Meg tin whistle to ANYBODY that wanted one. Andy managed to keep his sanity with 200 whistles wailing away from people of all ages in front of him. Andy covered the basic scale, covering the holes properly, blowing properly, cuts, taps, and rolls! No doubt some people retained more than others, but nonetheless a fantastic introduction to the mass public about an affordable entry into Irish traditional music. I had a total blast. Craig.
Posted by Craig at 21:51 No comments: Links to this post

The Ottawa Cape Breton Session is coming to join us at Fiddleheads in Perth, ON, this Sunday, August 26, at 3 p.m. This session plays traditional Celtic music focusing on the tunes and culture of Cape Breton Island. More information is available HERE. Please join us if you can. Directions to Fiddleheads For more information please call me, Janice Parton, at 613-256-6463 or Clare Dwyer at 613-278-0057. (submitted by Janice Parton)
Posted by Craig at 19:36 No comments: Links to this post

Fiddleheads in Perth will be the home of a Traditional French Canadian session in the months to come to be held one Sunday afternoon a month. To help get us ready for the session we are offering a study session to learn traditional French Canadian tunes to be lead by accomplished fiddler Dawson Girdwood of Perth, who has studied with legendary fiddler Jean Carignan. The Study sessions will tentatively be held from 1-3 p.m. preceding the regular 3 p.m. session, one or two Sundays a month (frequency to be decided as a group at the first meeting). The location is yet to be determined but will be in Perth as close as possible to Fiddleheads so we can easily go from one to the other. Price for the study sessions is $10 per session attended. The fee will end once we take the session to the pub. If you are interested in joining us for the study sessions, please contact me, Janice Parton, by email or by phone at 613-256-6463, by September 6, 2007. First study session will tentatively be held on Sunday, September 23, 2007 at 1 p.m. (submitted by Janice Parton)
Posted by Craig at 19:16 No comments: Links to this post

A Mountain Road, and a Trad Session 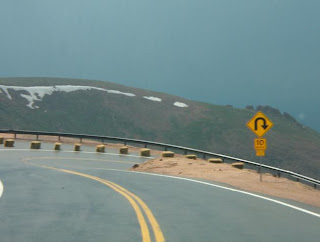 In this post are two pictures I took in, and near, Colorado Springs. The road is the Pike's Peak Highway which peaks at 14,110 ft above sea level. It was the venue for the 85th edition of a famous motorsport race (only the Indy 500 is an older race, in the USA). The pub shot is taken at a session at Jack Quinn's Pub (very nice pub, good grub, and they had Murphy's!) in Colorado Springs at the regular Sunday afternoon session. I learned of the session at thesession.org. Finally, after 6 days living at 6500 ft altitude, two pints didn't practically drop me to the floor! The instrumentation was the usual fiddles, bodhrans, flute, guitar, and a seasoned highland piper turned newbie uillean piper. This fellow also played some Border Pipes, which I'd never seen or heard before. They are quite interesting, sounding more or less like 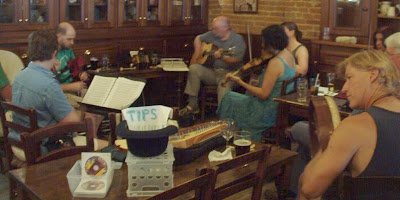 highland pipes, but much quieter and played with a bellows as with uillean pipes, and no design for regulators. This session has apparently recorded a cd and accept tips (monetary, that is). All in all, a nice bunch of folks and a friendly session.
Posted by Craig at 22:39 No comments: Links to this post

One of THOSE tunes…

Preamble: While still primarily an observer in the trad. scene I’m reluctant to write an opinion piece. All I can say is if you have an alternate opinion, idea, review, proposal, etc., share it and I’ll publish it, I promise! That’s what this blog is supposed to be about. I can publish it anonymously if you fear the torch mob for espousing radical socio-musicological-political ideas! :)

You know them. The Kesh Jig, The Irish Washerwoman, Danny Boy, Dingle Regatta, and so on. Some sessions will play them, others won’t. Generally, they won’t. They’re too good for (or too tired of) THOSE tunes. It depends where you go.

I recently went to a session in as I was in the area to see a very famous car race on a dramatic mountain road (the road starts at 7000 ft, and goes up another 7000 ft, not much for guardrails). Great people there, by the way. Naturally, I kept having the tune The Mountain Road in my head. It’s a fantastic reel. I mean, I really like this one. In , situated next to the of the beautiful , you can forget it. I was a little surprised. I’ve read online that striking up the Dingle Regatta in the Kerry/Dingle region will get rolled eyes as well (in fact I got rolled eyes at an Ottawa session for suggesting it). Too bad, it’s actually a jolly fun three part tune. The Kesh Jig played anywhere near , same deal. A friend of a friend said he heard that Paddy Keenan played the Kesh Jig in a concert – the horror! Of course he played the Kesh Jig, have you heard the Bothy Band’s classic version? Why shouldn’t he play it, it’s a great jig! When you can play it like Paddy, you play it and don’t give a fiddler’s fart what anyone else thinks. I’ve deduced the rule is if the tune is really good, was popular, and from your area, forget it. When will we lose the St. Annes’s Reel? Some tunes are ‘worse’ than others for being rejected, and even I don’t want to hear Danny Boy more than once a year. At a fairly recent O’Connell’s session, well after the main session was over, a punter brought his girlfriend and wanted to hear Danny Boy. Upon initial rejection of the request I felt quite bad for the guy, sitting next to his girlfriend, who didn’t know it was one of THOSE tunes. One of the musicians bravely decided to play it and their smiles came back. It was a nice version, too. Good session PR. If you haven’t heard Shane MacGowan’s version of Danny Boy (or his gut wrenching Waltzing Matilda) you’re missing out. Very moving. At my recent house concert Don Kavanagh ‘bravely’ played The Irish Washerwoman on harmonica. Notably, he apologized before playing it. It’s a fairly tired, clichéd, tune but when you can play it with life and energy like Don, you play it. If Don can play it that’s good enough for me. It was a real crowd pleaser.

I think in most cases tunes stand the test of time on their merits. For one, they’re still here. The onus may, therefore, be on the musician to play it such that it has its original life breathed into it. While avoiding garish embellishments, the dots on the page are only a guide to the main tune. Be brave. Play what’s good (but, please, attempt to maintain the one-Danny-Boy-maximum per year, preferably sometime in early March).

Posted by Craig at 00:47 No comments: Links to this post