With great prices for the unique and storied films fresh off the press from Ireland, the Irish Film Festival Ottawa starts tomorrow (27 March 2015) at the Arts Court Theatre, 2 Daly Avenue.

G'wan, just go an by a load of tickets and enjoy the shows.

Posted by Craig at 21:21 No comments: Links to this post


(Please see : http://www.cbsession.com/ for this event and other great events in the Scottish/Cape Breton Style.)

Posted by Craig at 16:34 No comments: Links to this post

All Saints Anglican Church in Westboro
347 Richmond Rd. Ottawa, Ontario, K2A 0E7
$20 for tickets, $18 for students and seniors.
Tickets are available from the Leading Note, All Saints United Church, The Ottawa Folklore Centre, and from Ellen MacIsaac. 613-552-3964 or ellen@laughingbrook.ca

(ed.: this will be a fantastic show if it is even remotely like the last time the Ottawa Celtic Choir teamed up with the Montreal Welsh Choir) 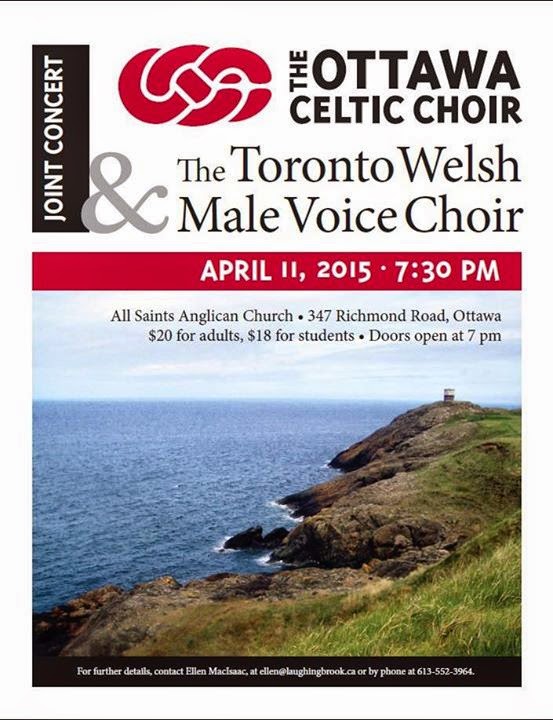 Posted by Craig at 16:19 No comments: Links to this post


If workshops aren't your thing, this will be a superb house concert.

Send an e-mail to rmacdiarmid@cogeco.ca to book your spot for the concert or workshop.
Weekend registration includes workshops all day Saturday and a ½ day Sunday, Saturday evening concert and session. Potluck shared food, BYOB, and Kingston has a range of B&B's and hotels to stay in - we can provide information. Free billeting is also a possibility.

Patrick Ourceau is a virtuoso on the fiddle, an avid student of the old masters,  and a particular specialist in the style and repertoire of Clare and East Galway.  Since moving to North America, Patrick Ourceau has performed with many U.S.-based musicians, including the legendary accordion players James Keane and Paddy O'Brien, concertina wizard John Williams, and the band Celtic Thunder. In June 1999, Patrick joined the Tulla Ceili Band on their last U.S. tour, and for three years has performed regularly with former Tulla Ceili Band accordion player Andrew McNamara. For several years, Patrick's main concert partner was Gearóid ÓhAllmhuráin, a renowned County Clare concertina player now living in Montreal. Together with Gearóid, Patrick performed in concert and at festivals all across Europe and North America. In 1999, they released Tracin', a critically acclaimed duet recording faithful to the style and repertoire of the older generation of traditional musicians in Clare and East Galway.

Patrick is also featured on flute player Cathal McConnell's last solo album, Long Expectant Comes At Last, released in February 1999 on the Compass Records label, and on accordion player John Whelan's Celtic Roots, released in February 2002 on the Narada label. Patrick also appeared with a host of local musicians on Music and Songs from East Clare - Volume 1, an archival recording made as a part of the Millennium Project to preserved and collect folklore in that part of Ireland.

Patrick has been in great demand as a teacher and regularly teaches out of his home in Toronto. He has taught at various festivals in the U.S. and Canada, such as the Chris Langen Weekend in Toronto; the Saint Louis Irish Festival, and the Augusta Irish Week in Elkins, West Virginia; and at the Fleadh Nua in County Clare, Ireland.
Patrick has also played in the band ‘Chulrua’ with Paddy O’Brien and Pat Egan.

An All-Ireland champion from Dublin, based in New York, Ivan plays uilleann pipes (Irish bellows-blown pipes), whistles and Irish wooden concert flute. A traditional musician with an eclectic background that includes master degrees in both musicology and computer composition, Ivan has performed in several well-known productions including extended engagements with Riverdance (US tour and Broadway), Michael Flatley's Lord of the Dance and has featured in film scores such as recently-released Cremaster 3 (Matthew Barney) exhibited in the Guggenheim museum 2003. In addition to performing as a solo artist, Ivan has collaborated as performer and composer in the theatrical productions Peacefire and The Voice of the Sea (Mac Uibh Aille) and has performed with numerous bands and artists including NYC-based Whirligig, Cathie Ryan and Irish traditional band Lúnasa.

(the above is stolen word for word, with permission, from the Kingston Branch of Comhaltas Ceoltoiri Eireann with web address: http://www.srayner.ca/comhaltas/M_SpecialEvents.htm )

Posted by Craig at 16:10 No comments: Links to this post

The concert is at Abbotsford House Recreation Centre, 950 Bank Street (across from Lansdowne) and the cost is only $7 at the door. (That's a great deal to hear these talented performers!) 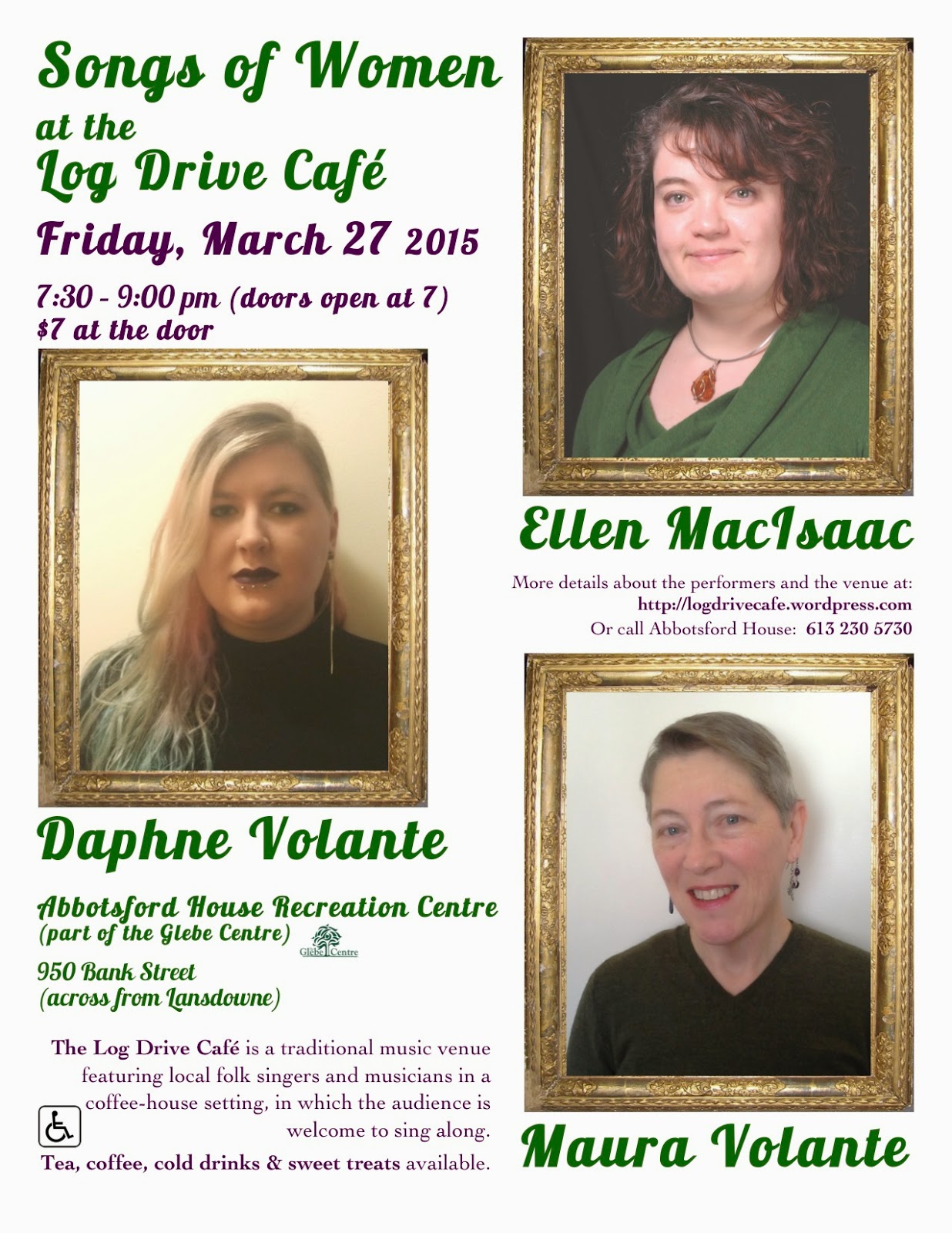 Posted by Craig at 17:36 No comments: Links to this post

Hopefully you have some time to enjoy the day during the daylight, or maybe after a day at work. Either way, have a grand St Patrick's Day to all our friends and acquaintances. Don't forget to support local Irish-related events throughout the year, not just on the 17th of March. Enjoy ye selves, but not too much you'll end up in the back of a police van.

Slan
Craig
Posted by Craig at 10:37 No comments: Links to this post


What to do Friday night, March 13h, go to Gaia Java Coffee Company!

In honour of the impending St Patrick's Day, Kevin and Deirdre Dooley will be performing a special concert of tunes, songs and stories, in English and in Gaelic. Kevin plays whistle, flute, sings and tells fascinating stories, and is joined by his daughter Deirdre who plans bodhran, djembe and lap snare, together with other percussion resources.

We hope you can come and join in what promises to be a fun evening of authentic Irish music.

Posted by Craig at 20:52 No comments: Links to this post

Get your Irish on the Web, and on your phone!

Live Ireland is a pretty good online radio station playing a wide selection of traditional music, and modern "trad-related", and rebel music etc. It's not overladen with talk or ads (rare in fact). See: http://my.liveireland.com/

The other one, for users of iPhones (I am not sure if available for Android phones), the RTE Radio Player app is pretty smashing good. From this app you can access all RTE radio channels, live, or recap, and that includes RTE Raidio na Gaeltachta, and they play a fair bit of core traditional Irish music (and if you're learning Irish, or speaking it, you'll hear nothing but Irish on this channel).

So there you go.

Posted by Craig at 20:49 No comments: Links to this post

Straight from the Harp - 19 March

Straight from the Harp

Description
Weaving together the storytelling talents of Tess McManus (Tales She Tells) and the musical finesse of Seraphina, the duo of Susan Toman on harp, and Dawn Bailey, soprano, Straight From the Harp takes us on an Irish Celtic Journey through tales of myth and wonder, and then to present day, where a young woman learns about love and loss through the power of storytelling.

Straight from the Harp combines the talents of three exceptionally talented young performers, all rising stars in the arts in Canada.

Posted by Craig at 09:50 No comments: Links to this post

The Next Stage: Acacia Lyra and The Main Street Market Duo - 6 March


The Next Stage: Acacia Lyra and The Main Street Market Duo
Date and Time: March 6, 8:00 pm

We continue our weekly series of local music, storytelling, poetry and drama with the Next Stage in partnership with the Spirit of Rasputins. On Friday March 6th come and enjoy the music of Acacia Lyra and The Main Street Market Duo.

Acacia Lyra is not just your average harp and voice duo. Janine Dudding and Susan Sweeney Hermon sing in English, French, Spanish and Gaelic, accompanying themselves on Celtic harps and guitars. As harpers, Susan and Janine are keepers of traditional ballads handed down through the ages. But they also open the windows of their ancient castles and lofty halls to allow fresh aires into their repertoire.

Their compositions are a reflection of the duo’s Irish heritage as well as their Canadian experience of pristine lakes and snowy landscapes. Most recently Janine, who has been living part-time in Iqaluit, Nunavut, has been influenced by the haunting allure of the far North and the beauty of Inuit culture. Susan tends to look southward for inspiration, with thoughts of swaying palm trees and Latin rhythms. The two are the best of friends, musically and otherwise.

The Main Street Market Duo is an Ottawa-Canada based world music act composed of Paul Weber and Loic Martin. The duo began with informal jam sessions between Paul and Loic at their local farmer’s market. A couple of summers of playing in the market inspired Paul and Loic to begin performing more regularly. They play a blend of jazz, folk, African and Latin styles of music, in an acoustic format. They are also one half of the Main Street Market Band – a quartet that plays the same material.

Posted by Craig at 12:25 No comments: Links to this post


When I saw Tommy Tiernan last time at the Centrpointe Theatre, it was one of those shows that was so funny you couldn't remember a thing by the time it was over. An onslaught of Irish funny through wild tales from his own experiences in life.

Tomy is coming on April 14. I believe the show is almost sold out, so if you're on the fence, don't delay. Go to the Centrepointe website for more details and access to tickets.

Posted by Craig at 19:00 No comments: Links to this post


An up coming concert, "Close by the Sea - The Music of Celtic and Nordic Islands", takes place on Sunday March 1, 8.00pm. at St. Luke's Anglican Church, 760 Somerset St. W. Ottawa.

For further information contact Mary Muckle at 613- 825-1379 or www.mucklemusic.com

Posted by Craig at 15:17 No comments: Links to this post


Get your tickets now for what will be a sold out performance. Genticorum will entertain and amaze you with their talent, energy, enthusiasm and wit. These guys have so much playing music on stage that it infects the audience with joy and solace. A highly recommend gig if you want to turbocharge you entry into spring from the dreary winter of 2015!

Visit the Ottawa Contra website for more details and tickets.

Posted by Craig at 12:31 No comments: Links to this post


See and hear the musical talents of the Celtic Tenors on Saturday, March 7, 2015 at 8 pm, at the Shenkman Arts Centre, Orleans.

"The only tenor group with a truly global audience, The Celtic Tenors will give you a night to remember. These world-class artists provide an evening to savour and a night with tenors who despite their incredible success don’t take themselves too seriously! The Celtic Tenors have established themselves as the most successful classical crossover artists ever to emerge from Ireland. In 2000, following an impromptu audition at EMI in London, the Celtic Tenors were signed on the spot to an international record deal, a highly unusual event that was the talk of the music industry."

For more information and tickets, please visit the Shenkman Arts Centre website for this performance.

Also, listen to a hearty interview with the Tenors on The Gaelic Hour (Sundays 8-10am on 97.9 CHIN FM) from the radio show archives for 22 February 2015. What a fun bunch of lads!
Link to The Gaelic Hour Archive
Posted by Craig at 11:59 No comments: Links to this post