Bring your own beverages (there will be a liquor licence but no alcohol for sale).

Posted by Craig at 20:42 No comments: Links to this post


A superb concert coming up with Maja Kjær Jacobsen & David Boulanger at the Southminster United Church, 15 Aylmer Ave. (Bank St. at the canal)

Tickets and info can be found at http://www.ottawacontra.ca/view/?concert

A concert with Maja & David is a powerful performance of pure fearlessness, virtuosity and musical personality.

Maja & David are known for their phenomenal contact on stage, and they possess the ability to create an intense atmosphere around their music. The soundscape moves from only one fiddle, to sounding like a whole fiddle quartet with percussion and a lead singer.

The duo’s most recent CD “CPH-Café-YUL” came out in May 2015, and two years after the debut “NORD”, released in June 2013, time and touring have added more layers to the soundscape. They both sing more; David plays Jaw Harp to Maja’s composition “Après Apéro” and harmonica on his own Québécois song “Quel Triste Sort”; Maja appears more on the Norwegian Hardanger Fiddle as well as adding foot stomping on several tracks. The result is a wholehearted and well-matured unity between Maja Kjær Jacobsen’s and David Boulanger’s musical backgrounds.

Maja Kjær Jacobsen | Denmark
Fiddle (GDAE), Hardanger Fiddle ( BEBF#, 8-stringed fiddle from Norway), and song.
As the daughter of a singer and guitarist, the path to becoming a musician herself lay very close. At age 14 she took up the fiddle, with great inspiration from the fiddlers performing at festivals such as Tønder Festival (Denmark) where Maja has been coming since she was 8 years old.

Posted by Craig at 12:14 No comments: Links to this post

Lecture: The Irish in Latin America, Prof. Dermot Keogh, U of Ottawa, 2 May 2017 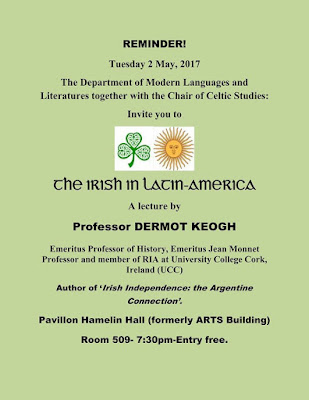 Posted by Craig at 21:24 No comments: Links to this post


Atlantic Voices celebrates spring, the season of romance, with a concert of East Coast love songs entitled Sea of Love. Join the choir Sunday, May 28 at Centretown United Church, as they trace the ‘course of true love’ through folk melodies and contemporary Atlantic classics, with songs of courtship and star-crossed lovers, and even the odd wedding thrown in for good measure. The concert starts at 3:00 p.m., with pre-show entertainment from The Fumblin’ Fingers at 2:15. Tickets are $20 in advance/$25 at the door. Children 12 and under free. Silent auction and reception to follow.

Parking at Glashan School, and at several lots on Catherine St. from O'Connor St. to Kent St.

Check out our concert poster at: http://www.atlanticvoices.ca/musicformembers/

See you at the show!

Posted by Craig at 21:13 No comments: Links to this post

An evening of Cape Breton-style fun for everyone. Fiddles, pipes, pianos; square dancing and step dancing all in one big blast. Part concert and part dance, there will be something everyone can enjoy. If you're planning to visit Cape Breton this event will give you a good taste of the culture you can expect to see. If you've already been there and love the island this will warm your heart. If you are from Cape Breton this will be a taste of home, bring your children/grandchildren to connect with their Cape Breton roots. All ages welcome, cash bar.

If you're not sure about the square dancing, don't worry! Square dance instruction will be provided by Beth MacGillivray as needed.

KENNETH MACKENZIE is a piper and fiddler from Mabou Coal Mines, Cape Breton Island. He grew up speaking Gaelic and surrounded by Gaelic culture and tradition bearers and is well-known for his lively traditional style and for the strong Gaelic flavour to his playing. His piping is well-known for its irresistible drive and lively, traditional feel. In 2010, Kenneth was the recipient of the Celtic Colours Driveers Award and released the ECMA-nominated album Pìob is Fidheall (Pipes and Fiddle) with his brother Angus. Kenneth has also recorded with Natalie MacMaster, Brenda Stubbert, Dawn and Margie Beaton, Chrissy Crowley, Kinnon Beaton and others. He tours with his brothers Angus and Calum and also as a member of the Beaton Sisters Band and his music has taken him through Canada and the US, Ireland, Scotland and the UK, Australia and Central America. More recently he has teamed up with Keith MacDonald and Kevin Dugas in the exciting new traditional piping group Nuallan.

Kenneth's brother CALUM MACKENZIE lives in Ottawa but was born and raised in Mabou, Cape Breton. He grew up in a home where Gaelic was the language of choice and where he was surrounded by traditional music. Calum took up the piano and the fiddle at a young age. His father hails from South Uist in Scotland and his mother from Back Street in Mabou, and both cultures influence his playing. Calum counts Mac Morin and Troy MacGillivray among his piano idols and many Cape Breton fiddlers influenced his playing greatly, from John Morris Rankin, Iain MacDougall, Buddy MacMaster to Shelly Campbell. Calum has been fortunate to play with many Cape Breton artists both at home and abroad as well with many well-known international musicians at festivals in Canada, Scotland and the Caribbean.

ALEXIS MACISAAC and Calum MacKenzie are a wife and husband duo who have established a unique musical partnership that combines Cape Breton piano playing with a modern approach to Celtic fiddle. Alexis playing is a multi-faceted harmonization of Irish, Scottish, and Cape Breton styles. Though their respective approaches to music are distinct, together they create a clean and seamless sound that is nonetheless grounded in tradition.They have recently recorded and produced their debut album, The Bay Street Sessions.

Posted by Craig at 21:04 No comments: Links to this post