The first is a Christmas CD for Celtic harp. I made all of the arrangements on the album; it features lots of traditional Christmas carols, and a few jigs for fun! A few of the carols work really well as lullabies for babies - inspired by my youngest of course, now just 1yr old. The album's called "Angels on High."

The 2nd CD is by my group Hibernia. Ellen MacIsaac joins me (singing) on this album entitled "Wide Waters." It's an album of traditional Irish and Scottish songs that tell great stories! Some are more melancholy, while others are spirited and catchy. Two fabulous guest artists join us on this our debut album: Ross Davison (whistles & uilleann pipes), and Ken Harper (bodhran). (sample clip)


The official joint CD launch for these albums will be on Saturday November 4th at 7:30pm. Location: Nepean Creative Arts Centre (35 Stafford Rd), in the Rehearsal Studio in Bldg.5. There is lots of free parking.

Admission to the event is $15, payable at the door. CDs will be $20/each, or 2 for $35. Light refreshments will be served, as we celebrate the release of these albums!


Thanks, and please do tell your friends.
All best,
Susan

p.s. For anyone who would like a CD or two but can't come to the launch, please let me know and I'll find a way to get it to you!

Posted by Craig at 18:33 No comments: Links to this post


The Newpoint Players drama group from Newry, Ireland will be back in Ottawa for a concert and play in November.  They will be presenting their 2017 production of The Trial of the Orange Order  by Anthony Russell.

The group will be in Ottawa on Tuesday November 14th for a concert of traditional Irish music, and will be showcasing the play on Wednesday November 15th. Both concert and play will be held at St Brigid's. 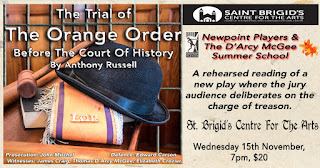 Tickets are available via the following methods:

1. Online, via our Eventbrite link: https://www.eventbrite.ca/e/limelight-theatre-presents-the-trial-of-the-orange-order-tickets-39092434524

2. At the doors on the night of the play ( limited amount of tickets will be available, based on online sales).

3. For pickup, by emailing Limelight directly at  limelighttheatregroup@gmail.com

Vanessa McLean, Pat Kelly, Damien Fannon, and Kay O'Hegarty will have hard tickets available for sale as well, and we will be making the rounds at many of the Ottawa-Irish events in the next few weeks.

Detailed information about the concert and play are below.

Newpoint Players and Limelight Theatre Ottawa present:The Trial of the Orange Order before the Court of History, by Anthony Russell.

This play is an exciting two act historical and political fantasy; a drama that as objectively as possible seeks to examine the role of the Orange Order in the formation of modern Ireland as well as The Canadian Confederation.

The premise is that James Craig (1871 – 1940), the first Prime Minister of Northern Ireland, is called from beyond the grave to answer the charge, that in rejecting Home Rule, the Orange Order committed treason against Ireland and Britain!

A creative twist: The audience is the jury! This is one of the most fascinating aspects of the play:  At the end of the trial, members of the audience participate in an unscripted jury room discussion and then cast their vote on the guilt or innocence of the accused.

Join us at St Brigid's Centre for the Arts for a brilliant evening of  political and historical drama!

Posted by Craig at 18:00 No comments: Links to this post

Posted by Craig at 17:53 No comments: Links to this post


There will be a St Andrews dinner/dance at St Patrick's Church, Kent St, on Sat Nov 25, 5:30 p.m.
tickets  from standrew.brownpapertickets.com

Posted by Craig at 17:47 No comments: Links to this post

This celebrated partnership of “one of the UK’s most staggering and influential acoustic guitarists” (fROOTS) with “the doyenne of Irish harpers” (SCOTLAND ON SUNDAY) and sole harper recipient to date of Irish music’s most prestigious award, Traditional Musician of the Year (Gradam Cheoil TG4), has presented its unique musical vision in twenty-two countries on five continents to venues ranging from the tiniest of village halls to palaces in Kyoto and Istanbul, London’s Barbican, Sydney Town Hall and the Philharmonie in Cologne - a breathtaking blend of traditional Irish music, hot jazz, bluegrass and baroque, spiced with striking new compositions - and what The West Australian calls “Chris’s delightfully subversive wit”!

Máire is “the doyenne of Irish harp players” (Scotland on Sunday) and one of Ireland’s most important and influential traditional musicians: she was described by the late Derek Bell as “the most interesting and original player of the Irish harp today”. As a teenager in the 1970s she invented a whole new style of harping that quickly became the norm amongst both her contemporaries and the younger generation of Irish players. In 2001 she received Irish music’s most prestigious award, that of Traditional Musician of the Year – Gradam Cheoil TG4 – “for the excellence and pioneering force of her music, the remarkable growth she has brought to the music of the harp and for the positive influence she has had on the young generation of harpers”. A busy international touring schedule has brought her to twenty-two countries on five continents.

“Chris is amazing... one of our greatest musicians”
BBC RADIO 2

Chris is a “brilliant English master of the acoustic guitar” (THE DAILY TELEGRAPH), a “dazzling player” (ACOUSTIC GUITAR, USA) whose work is “nothing short of brilliant” (DIRTY LINEN, USA). He began to play guitar at the age of four and at fourteen played his first paid gig in a folk club. A prolific composer, arranger and record producer, he’s played with luminaries of many musical worlds: folk (harper Máire Ní Chathasaigh, Boys of the Lough, Aly Bain, Kathryn Tickell, Danny Thompson), jazz (Stéphane Grappelli, Diz Disley and Danny Thompson again) and comedy (Fred Wedlock, the Pigsty Hill Light Orchestra) – receiving a silver disc for producing Fred’s international hit The Oldest Swinger in Town, to which he also composed the tune and which reached No 2 in the charts in the UK and No 1 in several other countries.

For more information and how to obtain tickets, please click the link to Saint Brigid's Centre:

Posted by Craig at 21:50 No comments: Links to this post


The Ottawa Irish Arts October ceili (social dance) is Saturday 14 October in the church hall of Blessed Sacrament Church, 194 Fourth Ave (at Percy St.), in the Glebe. Start at 7PM. 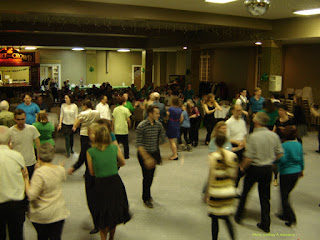 Kids 12 and under are free, and students are $5 admission. Non-members $15. Expect wonderful live Irish music from the award winning ceili band, a cash bar, laughs and giggles as you make your way through the dance steps, Irish food, tea and snacks, 50/50 draw, and entertainment!

All abilities welcome. no experience is necessary. You will be guided through the dance steps by their excellent dance callers.

If you are keen, they ask that you try out your Halloween costume out!

Posted by Craig at 20:53 No comments: Links to this post

Soulwood individually Daniel Haché, Alex Kehler and Willy LeMaistre, present a remarkable mixture of songs and tunes from Louisiana to Acadia to Scandinavia and many points between, on a variety of acoustic instruments.

Tickets and info at www.oldsod.ca

Posted by Craig at 20:31 No comments: Links to this post