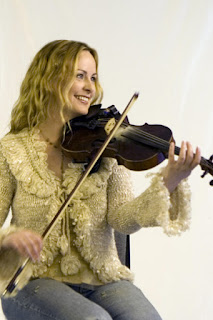 Irish Music Ottawa is proud to present the Niamh Ní Charra Trio, Tuesday 31 July, at the official residence of the Irish Ambassador to Canada (Dr. Ray Bassett) in Rockcliffe.

Niamh has already played Ottawa this past spring when she performed on-stage with Riverdance at the National Arts Centre. Her musical ability and stage presence were superb as she frequently interacted with the dancers. We are fortunate to have Niamh come back to Ottawa bringing her trio for one performance in a stunning venue graciously provided by the Ambassador. After Ottawa, Niamh will be 2 weeks in Italy, then Belgium and finally Ireland, before hitting the studio in September to record her fourth album.

All proceeds go to the musicians. Irish Music Ottawa is volunteer run and does not profit from this.

Prior to the performance, workshops of 1 hour duration will be provided for FREE, yes FREE, in the following (details are TBD): fiddle/Irish language/guitar/flute. You do not have to attend the concert to attend the workshops, although I highly recommend it and can hardly imagine you'll want to miss such a great show.

Online registration will be required, and workshop availability will be based on demand. The musicians biographies are provided below.

Please book the date for an evening of learning and incredible Irish music!! (and tell your friends!)

Niamh Ní Charra hails from Killarney, County Kerry in the south west of Ireland. Strongly influenced by the wealth of local Sliabh Luachra musicians, she started playing music at the early age of 4, under the tutelage of renowned local musician Nicky McAuliffe. A multiple award winner on both fiddle and concertina, she toured for 8 years as a soloist with Riverdance, performing in over 2500 shows, before returning to Ireland where she is now based.

She released her debut album "Ón Dá Thaobh / From Both Sides" in 2007 to much critical acclaim - it was the only Irish album on MOJO's Top Ten Folk Albums for 2007. She received the "Best Trad Music Act 2008" award from UK publication The Irish World, and "Best Fiddle/Violin 2008" by the American based Irish Music Association. She released her second album "Súgach Sámh / Happy Out" again to rave reviews - it was listed in NY Journalist Earle Hitchner's Top 30 albums for 2010, and as "probably the best album of 2010" in Irish Music Magazine. She was nominated for "Top Solo Performer 2011" in the Irish Music Awards and in January 2012 was awarded "Female Musician of the Year 2012" in the Live Ireland Music Awards. These awards, compiled by respected and renowned industry critic Bill Margeson, are (along with TG4) the most eagerly anticipated Irish Traditional Music Awards of the year.

Along with touring extensively as a solo artist and with her own band, Niamh has also performed and recorded with The Chieftains, and with Carlos Núñez. and recently released a new album "The Basque Irish Connection", in collaboration with Basque musician Ibon Koteron. She has taught both fiddle and concertina and regularly gives workshops and masterclasses.

Cathall King - Flute:
A tutor at last year's reknowned Meitheal, he is one of the new breed of avant-garde flute players currently emerging. He hails from the Clare/Limerick area and is quite experimental in style. He has an excellent natural flair for fluid, effortless ornamentation and variation which interweaves seamlessly with the melody. He has performed with Niamh regularly both nationally and internationally and also tours with Irish Dance show Celtic Legends.

Matt Griffin – Guitar:
Matt Griffin is a multi instrumentalist based in Dingle, in the West Kerry Gaeltacht of South West Ireland. Born in London of Irish parents, Matt grew up playing and learning music within the capital's vibrant traditional Irish music scene, teaming up with other young local musicians to form the group Mise. In 2004 Matt relocated to Ireland where he began his studies in Irish traditional music at the University of Limerick. Since arriving in Ireland, Matt's abilities as a guitar accompanist have been in great demand and he has recorded and/ or performed with a variety of artists including Alan Kelly, Steph Geremia, Niall Keegan, Garry Shannon, Michael O'Suillleabhain and The Chieftains. He is also teaches Guitar to local students in Dingle. (see Matt and Niamh in action in this video!)
Posted by Craig at 13:26