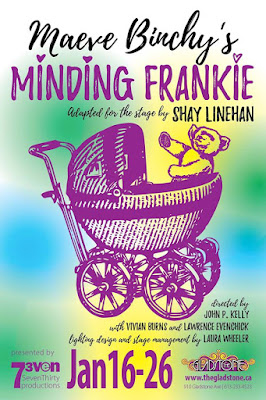 "Maeve Binchy was probably Ireland’s greatest romantic fiction writer.  Here, her 2010 hit novel Minding Frankie has been adapted for the stage by Shay Linehan. Watch Noel, a middle-aged Dublin alcoholic as he sets about raising baby Frankie.  “I intend to be the best mother I can be” he says.  Watch his whole community join in to share the responsibility – “It takes a village to raise a child. Or a street.” And watch well-meaning social worker Moira, a woman with secrets of her own, go beyond her call of duty to make his life as hard as she possibly can."


Visit The Gladstone Theatre webpage for the remainder of the description and to purchase tickets, to another fantastic production.

Enjoy an interview with John P. Kelly about the play on Irish Radio Canada.

Your blogger has never been disappointed in a John P. Kelly production!