If you can, don't miss this golden opportunity to see and hear the living legend . . . Paddy Keenan, founding member of the Bothy Band. 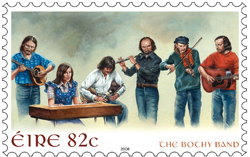 Paddy Keenan was born in Trim, Co. Meath, to John Keenan, Sr. of Westmeath and the former Mary Bravender of Co. Cavan. The Keenans were a Travelling family steeped in traditional music; both Paddy's father and grandfather were uilleann pipers. Paddy himself took up the pipes at the age of ten, playing his first major concert at the Gaiety Theatre, Dublin, when he was 14. He later played with the rest of his family in a group called The Pavees.

Paddy's flowing, open-fingered style of playing can be traced directly from the style of such great Travelling pipers as Johnny Doran; both Paddy's father and grandfather played in the same style. Although often compared to Doran, Paddy was 19 or 20 when he first heard a tape of Doran's playing; his own style is a direct result of his father's tutelage and influence Paddy Keenan, YouTube Paddy Keenan Biography

Brian Taheny is one of the absolute best mandolin players of Irish music around. Brian immigrated to Toronto from County Sligo about 25 years ago and is a multi-instrumentalist playing mandolin, fiddle, guitar, bouzouki, cittern, tenor banjo and more but he has a particular love for the mandolin. He plays at warp speed with incredible lift and constantly changing ornamentation and knows more tunes than anyone I have ever met. He has recorded on over 70 albums, but the only CD on which he plays exclusively mandolin is one called Mando Lore with Andrew Collins. As Brian has a day job, he is not as well known as he should be. Brian Taheny, youtube