The Royal Canadian Legion, Montgomery Branch #351, 330 Kent St, Ottawa, plays host to a Celebration of Life for the Late Great Ron Hynes warmly referred to as "The Man of a Thousand Songs" who passed away November 19th 2015 just weeks shy of his 65th birthday.

The Show is Titled "Remembering Ron" and will feature upwards of 10 incredible artists honouring the Life and work of one of Canada's Greatest Singer/Songwriters. 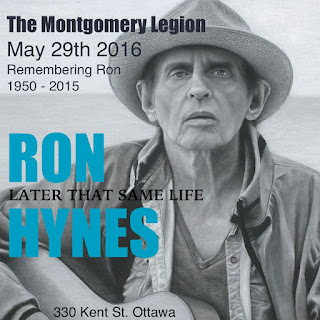 The Night will also mark the release of Ron's last piece of work a CD entitled "Later That Same Life" which was recorded at a very small out of the way studio in the Kawartha Lakes.

The CD is brilliant and captures Ron the way his fans enjoyed him most just simple and bare with minimal accompaniment Just Ron and the beautiful bass playing of Dennis Pendrith and the addition of former Wonderful Grand Band mate Glenn Simmons doing acoustic lead on "Marie".

So Please come out and join us in celebrating this incredible artist and his contribution to the arts.

It will certainly be a Grand evening of Song and Celebration