Andrea Beaton and Eric Wright
Are In The House!

Andrea Beaton
Andrea Beaton comes from a long line of musicians, composers and dancers. Both the Beaton and MacMaster sides of her family are well known and respected as some of Cape Breton's finest musicians, dancers and composers. She is an award-winning fiddler, tune composer and recording artist who is known for her powerful bow and driving style. She tours and teaches internationally and is in great demand as a teacher at music camps and fiddling/dancing workshops.

She has released 6 solo albums, one duo album with her father, Kinnon Beaton, and 3 books of her original tunes. She also recorded an album with her family "The Beaton family of Mabou" in 2007 for the Smithsonian Institute. Most of her solo albums were nominated for awards, and her 2010 CD, 'Branches,' won the Canadian East Coast Music Award "Instrumental Recording of the Year!
Andrea travels the globe, sharing her culture as well as exploring and writing contemporary tunes. Her music, dance and comical stories are sure to delight any audience.

Eric Wright
Picking up the cello at age 7, Eric Wright began his musical career as a classically trained musician. By 13, he was teaching group and private lessons in Vermont, while playing in numerous chamber groups and orchestras. He has received numerous awards, as well as being accepted into the Vermont All-State orchestra, New England orchestra, and winner of the Vermont concerto competition.

While he loved classical music, his father’s background in Irish and Old Time American fiddling was what really drew him in. Growing up, he had always accompanied his dad on cello, guitar, or other instruments, and knew that his love for folk music was too powerful to ignore.

From there, Eric moved to Boston and attended the Berklee College of Music where he studied folk styles with Eugene Friesen, Mark Simos, Natalie Haas, and John McGann. Eric joined forces with the multi-award winning group, The Fretless, a contemporary traditional fusion group, and has been touring all over Canada, the US, and Europe ever since.

Tickets $20 -- Seating is limited –
All proceeds go directly to Andrea and Eric
To reserve seats, email Graham at gcrate @ rogers . com
Light refreshment will be available during intermission (BYOB).


Want to unwind just before the big day of Christmas? After work? Head down to Brigid's Well Pub for the last monthly Irish traditional music session of 2017. Located at the edge of the market, it's your best Friday afternoon and evening getaway for a pint or glass of fine Irish whiskey (and they have a grand selection). 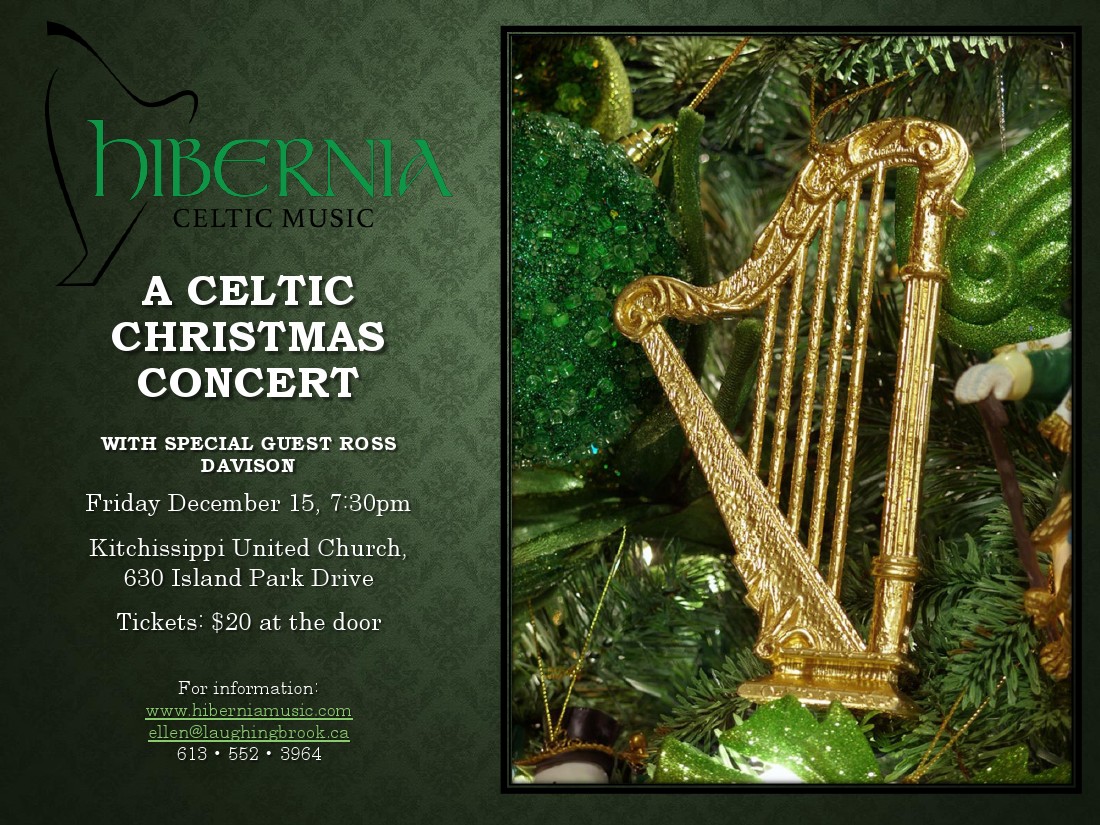 Two new CDs will also be available for purchase ($20/ea):

Four tunes have been added to the (previously published) slow session list. The list will not expand beyond further, this year. 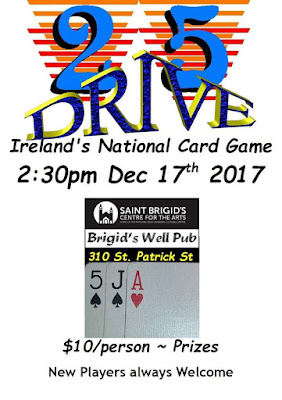 
December's Ottawa Celtic Kitchen Party (OCKP) is going to be a fun event! We're quite pleased to announce that Hibernia Music will be joining us! Hibernia is a duo of Celtic voice (Ellen MacIsaac) and harp (Susan Toman), specializing in the repertoire of Ireland and Scotland, in Gaelic and in English. And - they have just released their first CD - Wide Waters! If you love gaelic songs and all things Celtic harp, this will be an afternoon you shouldn't miss!!

Ernie Fraser (fiddle, guitar), Marietta Fraser (piano, guitar), and Diane Fraser (bodhran) will start the afternoon off at 1:30 pm with Cape Breton fiddling, celtic guitar and piano accompaniment. Ellen and Susan will take over and entertain from 2 - 2:45 pm. The afternoon will wrap up with all of us playing a few tunes together; Celtic harp is new for us, so this will be interesting! Come on down to Kat & Kraken (formerly Woody's Pub) for a cold one or two, some lively tunes, and some lovely, warm Celtic songs and harp music. Make sure to bring your friends and family, too!