The Ottawa Gaels (the GAA affiliate in Ottawa) are having the Annual Awards Banquet this weekend, Saturday November 25th, 2017, at The Heart & Crown in the Byward Market.

There are still some tickets available online, so please take a look and consider joining us for dinner, pints, laughs, some hilarious photos & videos, and all of the awards presentations.

Tickets can be purchased by following this registration link: http://ottawagaels.ca/save-date-2017-awards-banquet-saturday-november-25th/

Cocktails at 6 PM
Dinner at 7 PM


Bit late posting this, with apologies, but you too can play, or learn to play the Irish card game "25". The games are currently held once a month, 3rd Sunday, at Brigid's Well Pub, a pub that is quickly becoming synonymous with all authentic things and events that are Irish in Ottawa. 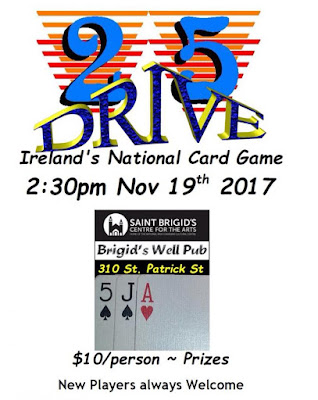 The 25 Game days are organised by Austin Comerton, of Irish Radio Canada. Keep abreast of the schedule, or changes to, by visiting Irish Radio Canada's Event page. Another key resource for Irish events in Ottawa.


"The Gaelic Hour," formerly a fixture on Ottawa's multilingual community CHIN Radio, and hosted by Austin Comerton, has now gone global with a 24/7 livestream of music and a variety of interesting shows to please many tastes. So please give it a listen! 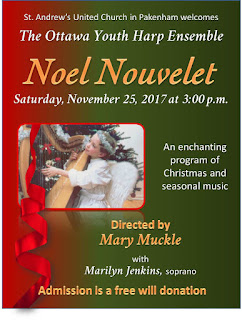 Their guest soloist is soprano Marilyn Jenkins. Come and enjoy a seasonal concert and drop in on Pakenham's Christmas craft fair, taking place Nov. 25. Festivities include the craft fair, meeting Santa and Christmas carolers and the Ottawa Youth Harp Ensemble at St. Andrew's.


Speed thyself to the Ottawa Celtic Choir Facebook page, and get excited for the two terrific concerts they have on offer for this Christmas season.

The Ottawa Celtic Choir should be on your annual Christmas concert circuit. Their repertoire will include melodies you know, some you don't, and sometimes the original melody of songs that over the centuries have been modernised. The choir sings songs from the seven Celtic nations, as well as from strongly Celtic-influenced areas (such as the Atlantic provinces, Quebec, Ontario, etc.). We sing in the six Celtic languages as well as English, French, and Galician-dialect Spanish.

A more unique choral experience will not be found than hearing this choir, now a mainstay in the Ottawa Celtic scene.


For those needing an excuse to travel for some Irish dancing in late January . . .

We are pleased to announce that that dates for the 2018 Cape Cod Ceili Weekend are confirmed: January 26-28.

Venue will be the Cape Cod Irish Village, host band will be the Northeast Ceili Band, and dancing activities will be in the capable hands of Barry and Pat Callahan (setdance.man@verizon.net).

Copy of the flyer (including the weekend schedule) is at www.capeirish.com/news/ci_supp/cccw15_flyer.pdf.

Many thanks for passing this info to your members!


In the Name of Peace: John Hume in America

Irish politician and civil rights leader John Hume saw that by harnessing the political influence of the Irish American diaspora, it was possible to achieve peace in Northern Ireland. Narrated by Liam Neeson, In The Name Of Peace is a compelling feature documentary about ending "the Troubles", with dramatic footage from the conflict and stirring accounts by Bill Clinton, Jimmy Carter, Tony Blair, Bono, and many others. A stirring tale of how one man with courage and charisma who found inspiration in Martin Luther King Jr. mobilized Irish Americans and America to bring an end to years of bloody violence. It is also serves as a useful reminder of the redemptive powers of politics to overcome hatred and division.

The following is an updated list of tunes which we will be playing at the St. Brigid’s Irish music SLOW session at Brigid's Well Pub, Cumberland St (corner with Murray). The next dates are: DEC 17, JAN 14, FEB 11, March TBD (because March is just mad with stuff going on).

The slow session will be held from 2 pm until 3pm and followed by a regular session from 3 pm until 5pm.


The Newpoint Players will be holding a concert of traditional Irish music on Tuesday November 14th, 2017 @ 7pm at Saint Brigid's Centre for the Arts! 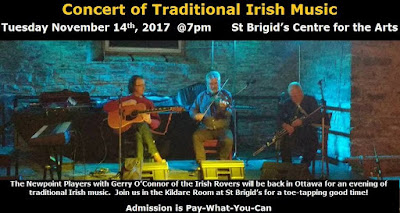 Joining them will be Gerry O'Connor of the Irish Rovers, on fiddle. Come on down after work so you can sit back and enjoy a great evening of music, friends, and a cold pint.

Admission is Pay-What-You-Can, with a suggested donation.
Posted by Craig at 10:17 No comments:


Limelight Theatre Group is delighted to announce that The Newpoint Players will be back in Ottawa for their latest production: The Trial of the Orange Order, by Anthony Russell. 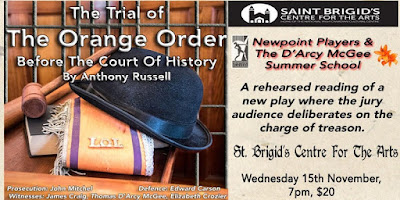 The Newry-based drama group will be touring in Canada this November and will be bringing their production to Saint Brigid's Centre for the Arts on Wednesday November 15th, 2017.

This is an interactive play, featuring the Newpoint Players from Ireland and local actors from some of our Ottawa/Irish community partners!

Tickets are $20 and are available online via the Eventbrite link below, or by emailing: limelighttheatregroup@gmail.com


Sheila and Lucile are celebrating their shared love of Christmas with this collection of original arrangements of traditional melodies such as The Cherry Tree Carol, Gloucester Wassail, I Wonder as I Wander, and Noël nouvelet. 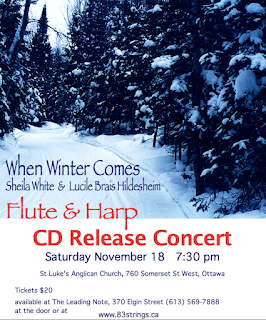 Lucile and I invite you to like us on Facebook — and help spread the word about our upcoming concert on November 18th at 7:30, at St. Luke's Church in Ottawa.

Ottawa Irish Arts is starting a new Slow Session from 2-3 PM on Sunday Nov 12 at Brigid's Well Pub. From 3-5 PM. The slow session provides an opportunity for participants to learn how to play Irish Traditional Music in a group setting (and all that entails) at a slower pace, in a learning environment.

For the Slow Session from 2:00 pm to 3:00 pm the tune selection will include:
Rolling in the Rye Grass, The Wind that Shakes the Barley, Off to California, The Boys of Bluehill, The Blackthorn Stick and Banish misfortune.

The slow session is followed by a Regular session. All musicians are welcome.

Each session will be lead by Frank Cassidy, well known in the Ottawa region for his decades of playing, arranging and recording of Irish Traditional Music. Most recently as a founding member of the D'Arcy McGee Band. Frank plays tune whistle, banjo and flute. 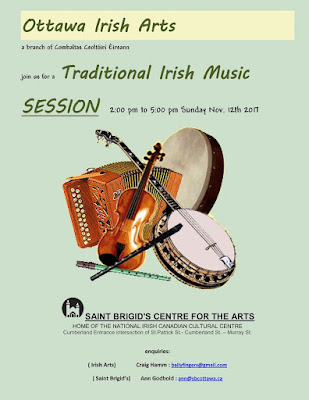 Ottawa Irish Arts is the local branch of the international organisation Comhaltas Ceoltoiri Eireann (CCE), which is dedicated to the preservation of the Irish traditional arts, primarily music, dance, and language. As such these sessions will stay focussed on session tunes that are considered common in the Irish repertoire.

Cape Breton artists bring the sounds of the east coast, and a new album to Ottawa.

A little bit of Cape Breton's famous Celtic Colours International festival can be found in Ottawa over the Nov. 10-12 weekend as fiddler Dara Smith-MacDonald and Adam Young bring their music and their newly released album, The Lake Sessions, to the area.

Ottawa is home to a large community of Nova Scotians, and other Maritimers who work hard to preserve their original Scottish/Irish culture and traditions, and share them with the local community at regular biweekly events as well as special concert and dance events. This weekend celebration will have something for everyone, whether you like it loud and lively, quiet and intimate, or educational.

The Cape Breton square dance is the mainstay of summer fun on the east coast, Dara and Adam will recreate that at the Montgomery Legion Hall on Friday Nov. 10. Cape Breton square sets aren't actually square and they're not complicated. As long as you know your right hand from your left and can count as high as four you'll have a grand time, and there's always someone willing to help you stay on course. 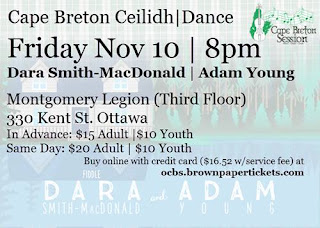 For those who prefer a quieter listening atmosphere Dara and Adam will perform at two house concerts, in Kanata and east central Ottawa. Dara and Adam are both sought after instructors in the Gaelic arts and will also be teaching fiddle, piano and dance workshops at various skill levels over the weekend.

More information about the events, and online ticket purchase is available at www.cbsession.com or www.ocbs.brownpapertickets.com.

The Lake Sessions is Dara's second release following the success of her debut album Connections in 2011. For this recording she teamed up with local Cape Breton piano and entertainment veteran Adam Young and PEI sound engineer and musician Brent Chaisson. The result is a nice cross-section of old and new tunes and styles, with an interesting mix of traditional and contemporary composers. This includes tunes from both Dara and Adam, mixed generously with writers such as Kinnon and Andrea Beaton, Paul Cranford, Dan Hughie MacEachern, Ewen Henderson, Wendy MacIsaac and Glenn Graham.

Dara Smith-MacDonald, born and raised in Antigonish, has been playing the fiddle for more than 20 years and now resides in Port Hawkesbury. With deep family roots in Inverness, she very quickly began to develop a style that is strong, lively and traditional. Dara has played for concerts, ceilidhs, and dances throughout Cape Breton, mainland Nova Scotia, Prince Edward Island, Ontario and the USA. Dara can often be found on stage with Adam Young, a sought after piano player from Marion Bridge. Dara and Adam released their first CD together, The Lake Sessions, in June.

Adam Young is a sought-after pianist from the tiny community of French Road. His unique style adds depth, solidity, and a joyful forward motion to the music, and a certain joy is evident on his face. Adam created and directed the Louisbourg Playhouse's popular music and comedy revue, Cape Breton Lyrics & Laughter, which has seen more than 350 performances since it began 15 years ago. He regularly plays at concerts, ceilidhs, square dances and sessions throughout Cape Breton, and has showcased his talents in Scotland and Ireland, across Canada and in the United States. 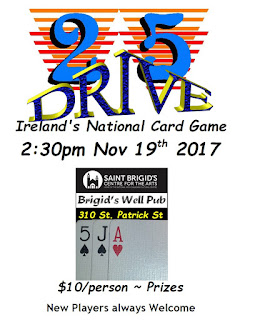 Following some consultation, the 3rd Sunday seems to be the preferred day for 25.

After the initial get together this may extend to the 1st and 3rd Sunday.


This year the Canadian Folk Music Awards are being held in Ottawa. Details and schedule are available here: https://folkawards.ca/events/ottawa-2017/

Go have a listen. Expect experienced musicians, I'd venture to guess.


An afternoon of Scottish excellence featuring the pipes, drums, song and dance in a showcase of local Celtic talent. With something for everyone, Scotland Tonight is a wonderful way to enjoy the Celtic arts in a grand variety show!

Link for info and tickets 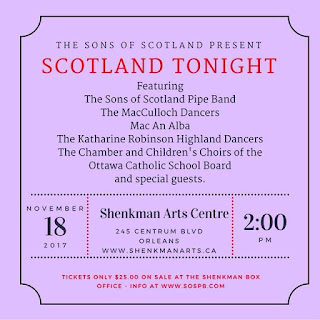