A real Irish Traditional Music gig in Ottawa, not too many of those these days, so get out and support this gig!

Irish Fiddle, Concertina and Dance music played by two musicians at the top of their game. From fast and furious reels to airs that tug at the heartstrings to marches into battle.  Caitlín & Ciarán cover the wide breadth of Irish traditional music.

“Ciarán has that Donegal fiddlers’ knack of being technically exact, fearless and free. Caitlín’s concertina is no less thrilling as she expands perceptions of the instrument.

At $10, this is a great deal. Join your friends for a pint in the adjoining pub, St. Brigid's Well, and bring your drink into the show.

Crab a beverage, relax and enjoy the music.

Join Ellen MacIsaac and the Ottawa Celtic Choir for another memorable choral performance! 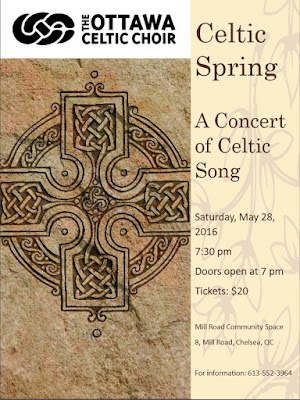 
Atlantic Voices celebrates a gentle giant among Canadian songwriters, Cape Breton's own Allister MacGillivray. Best known for 'Song of the Mira', MacGillivray is also the composer of 'Away From the Roll of the Sea', 'Song for Peace', 'Here's to Song', and 'Coaltown Road' which are fixtures on choir concerts around the world. We are pleased to present a selection of his most popular songs, as well as other treasures from the MacGIllivray songbook, newly arranged especially for this concert. Featuring special guess Ciarán MacGillivray of The Cottars. Pre-show music by the Fumblin' Fingers starts at 2:15. 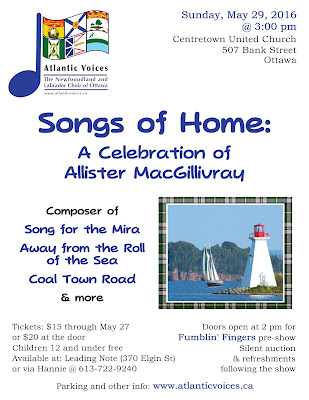 Parking at Glashan School, and at several paid lots on Catherine St. from O'Connor St. to Kent St.

Atlantic Voices: The Newfoundland and Labrador Choir of Ottawa is a community choir located in Ottawa, Ontario, Canada.


The Royal Canadian Legion, Montgomery Branch #351, 330 Kent St, Ottawa, plays host to a Celebration of Life for the Late Great Ron Hynes warmly referred to as "The Man of a Thousand Songs" who passed away November 19th 2015 just weeks shy of his 65th birthday.

The Show is Titled "Remembering Ron" and will feature upwards of 10 incredible artists honouring the Life and work of one of Canada's Greatest Singer/Songwriters.

The Night will also mark the release of Ron's last piece of work a CD entitled "Later That Same Life" which was recorded at a very small out of the way studio in the Kawartha Lakes.

The CD is brilliant and captures Ron the way his fans enjoyed him most just simple and bare with minimal accompaniment Just Ron and the beautiful bass playing of Dennis Pendrith and the addition of former Wonderful Grand Band mate Glenn Simmons doing acoustic lead on "Marie".

So Please come out and join us in celebrating this incredible artist and his contribution to the arts.

It will certainly be a Grand evening of Song and Celebration