Join fellow Ireland and Irish enthusiasts at Patty Boland's Pub in the Byward Market, 101 Clarence St., this Thursday night at 7pm, for an evening of fun questions and answers on the people, places, music, and history of Ireland. The event is a fundraiser for the Ottawa Branch of Comhaltas Ceoltoiri Eireann (English translation is "Gathering of the Musicians of Ireland"). There will be prizes available. Entry is only $10 per person, and teams of up to 4 people are allowed. A wide variety of topics have been chose, so everybody should have a chance at a few points over the night. Bring a friend!

Canada, The Irish Language and the Easter Uprising 1916

Aralt Mac Giolla Chainnigh, founding chair of the North American Gaeltacht, is working with the Irish Embassy to organize a commemorative conference at the Ambassador’s Residence on 19/20 February about the 1916 Uprising – see the announcement below, and the conference poster that is attached. You are strongly encouraged to attend. Click on the poster to enlarge. 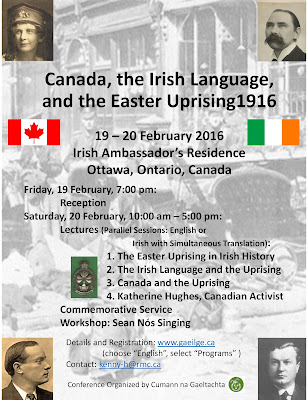 During the conference reception on Friday 19 February, at the Ambassador's residence, Bríd Guglich, a well respected and loved member of the Ottawa Irish community, is being honored by investiture as the President of Oireachtas Gaeilge Cheanada. The poster concerning that investiture is also attached. Click on the poster to enlarge. 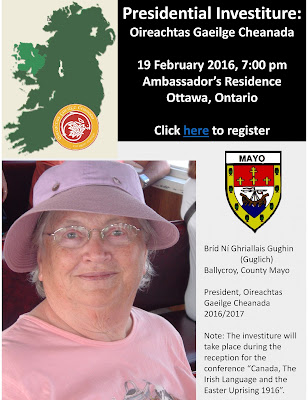 B'ys, your gonna wanna go see dis one 'ere. Click on the poster so ya's can read it proper.


Join Canadian Celt Rockers the Mudmen, Saturday Feb 6 at the Shenkman Arts Centre, in Orleans, Ottawa. Show starts at 8 PM. For a lot more information on the band, their accomplishments and accolades, and to purchase tickets go to this link. 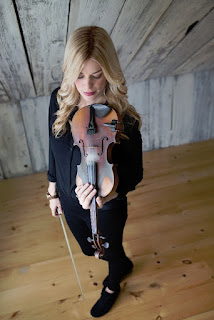 
When most people think of Irish dancing what often comes to mind is the highly athletic dancing as seen in the large shows like Riverdance. This solo dancing, or solo dancing adapted to large professional groups requires years of practice and dedication as do all form of performance.

Luckily, for the the mere mortals of us out there we can still enjoy Irish dancing without the fear of needing to compete on that level. For centuries Irish people of all ages and a wide range of physical abilities have been dancing at social gatherings.

The easiest form of social dance are the 'ceili dances', in which a large number of men and women, boys and girls, dance simple somewhat repetitive moves. It is common for these dances to be performed in large circles, or in lines. In nearly all cases these dances are 'progressive'. This means that as the music plays, you dance with one partner, and within a minute, you're probably dancing with somebody new. If the music plays long enough, you will come back around to your original partner.

Requiring more knowledge and practice, another form of social dance is the 'set dance.' In terms of North American dance terms, one might refer to this as Irish 'square dancing'. In Irish 'set dancing' four couples form in a square (a 'set') and move according to a preset sequence of standard moves. A dance is usually comprised of 4 or 5 sets. Each set in the dance is accompanied by a particular kind of Irish music, such as polkas, jigs, reels, etc. For many people, particularly those that have not grown up with set dancing, it can be difficult to remember the sequence of steps in the set. For this reason it has become more common to hear dances 'called', and many events will have brief lessons before the dance evening, or they will provide quick instruction between each set.  This latter method is what is done in Ottawa, at the monthly ceili hosted by Comhaltas Ceoltoiri Eireann (CCE).

If you've never tried attending a real Irish ceili, you should try out the CCE ceilis. They are very beginner friendly, and people of ALL ages participate. Nobody is there to compete, it's all for the craic! (fun!). Ceilis are generally held on the 3rd Saturday of each month (check www.ottawacomhaltas.com to confirm) at 7pm to 11pm, Blessed Sacrament Church, 194 Fourth Ave, in the Glebe. They have a cash bar and offer free snacks and tea later in the evening. Kids 12 and under get in free, making it an attractive option if you want to bring the kids and avoid the babysitting fees.