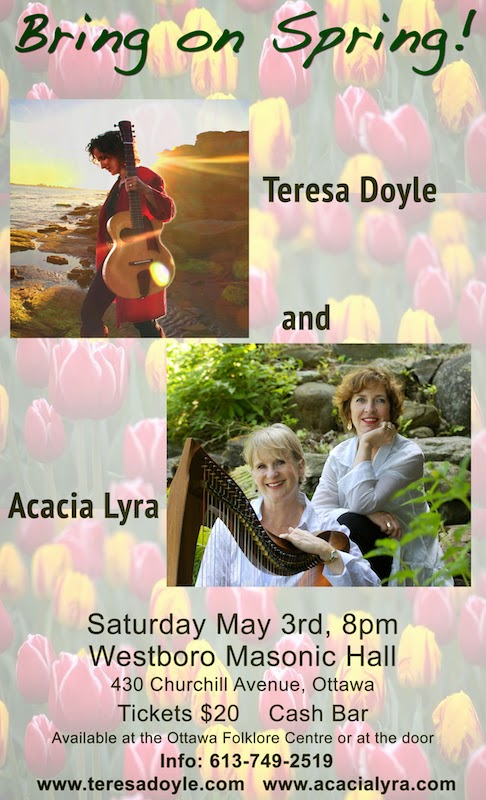 As harpers, Acacia Lyra duo partners Susan and Janine are keepers of traditional ballads handed down through the ages. But they also open the windows of their ancient castles and lofty halls to allow fresh aires into their repertoire. Their compositions are a reflection of the duo’s Irish heritage as well as their Canadian experience of pristine lakes and snowy landscapes. Most recently Janine, who has been living part-time in Iqaluit, Nunavut, has been influenced by the haunting allure of the far
North and the beauty of Inuit culture. Susan tends to look southward for inspiration, with thoughts of swaying palm trees and Latin rhythms. The two are the best of friends, musically and otherwise

Teresa is a critically acclaimed singer-songwriter and vocal explorer with eleven recordings under her belt. She is continuously experimenting with new vocal colours and textures from different cultures. Her repertoire reflects her journeys around the world while remaining rooted in the Celtic music and stories of her native Prince Edward Island.
Posted by Craig at 13:49 No comments:


Two of the very best traditional/folk music musicians in Ontario are playing a concert on Friday, April 11th 2014 at 7:30 PM, upstairs at the Southminster United Church Hall, 15 Aylmer Ave. Old Ottawa South. Guests are asked to use the Galt St. entrance. The church is located just off Bank St., near the Rideau Canal (south side).

James Stephens
Well-known as a record producer (Finest Kind, Pierre Schryer, Glen Road, Genticorum, The Brian Pickell Band and countless other artists in the folk/acoustic genre; winner of the 2003 Porcupine Award as “Producer of the Year”), James is one of Canada’s most versatile and inventive fiddle players, mastering a multitude of styles from Cape Breton to Bluegrass, Québecois to Appalachian Old Time, Irish to Ottawa Valley. James plays “anything that has four strings”, and often works his way through violin, 5-string violin, mandolin, tenor guitar and bass in the course of a performance. He has played with a Who’s Who of Canadian folk music, from Lynn Miles to Eh?, Ecosse and Finest Kind, and has a shady previous life in classical and rock music.

Greg Brown
Fiddle and accordion alumnus of many bands including Matapat, Tüq and Glen Road,. Greg is originally from Newfoundland, and cut his musical teeth on the tunes of Rufus Guinchard and Emile Benoit under the guidance of current Newfoundland fiddle great Christina Smith. Since moving to the capital region he has added a variety of styles to his tune repertoire, most notably from the Irish and Québecois traditions. Greg has also added accordion, anglo concertina, viola and guitar to his amazing arsenal.

Both these gentlemen are also great singers. They have previously collaborated as the bread in the